Beyond Twitter CPChatNow enjoys an engaging presence on Facebook via the CPChatNow Facebook fan page. There you will find articles about current events related to cerebral palsy, popular questions brought up during the previous chat, and more! Make sure to like us on Facebook.

As previously mentioned CPChatNow all started in December 2013. Tim Wambach from the critically acclaimed stage show Handicap This recruited Zachary and author/motivational speaker John W. Quinn (Someone Like Me: An Unlikely Story of Challenge and Triumph Over Cerebral Palsy) to co-host the first ever #CPChatNow Twitter chat. Zachary asked Blake to become a co-host after busy schedules forced Tim and John to step back. 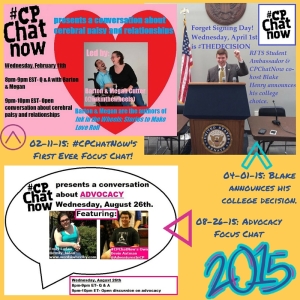 This virtual scrapbook page documents a few CPChatNow highlights from 2015.

Additionally in 2015 CPChatNow started holding a monthly video chat via Google Hangouts. These Hangouts take place on one selected Thursday every month. For privacy reasons invites to the Hangout go out privately. Contact Zachary on Twitter to inquire about receiving an invite.