This past week in #CPChatNow was busy as always.  With the holidays coming up members talked about the difficulty of gift wrapping and the greatest gift they have ever given.  This is #CPChatNow Co-Host, Devin Axtman, taking you along for the ride on this week’s recap.

First, members talked about the difficulty of wrapping gifts with CP:

Next, members talked about the greatest gift they have ever given with a variety of cool answers: 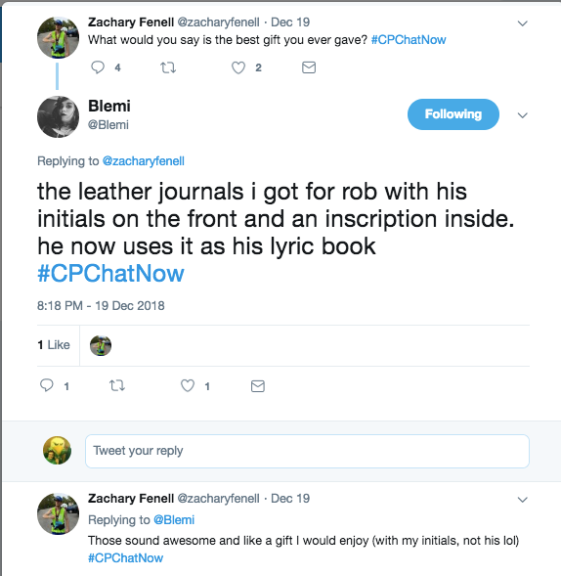 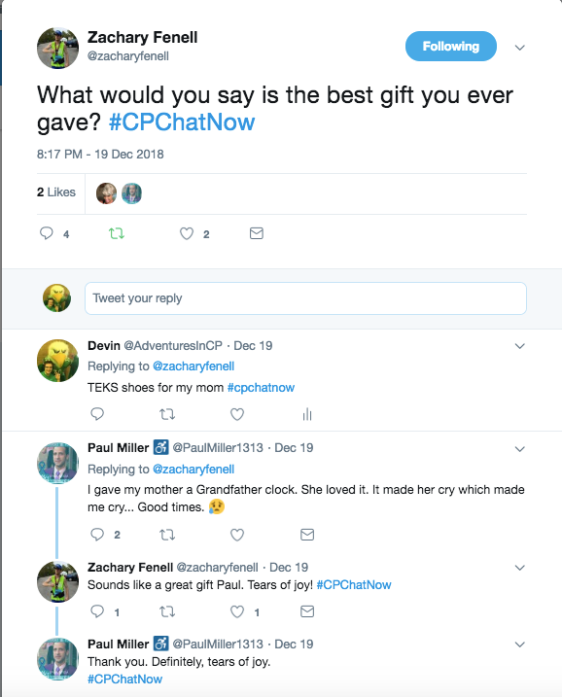 Don’t forget our Hangout Thursday, December 27th and answer our Extend-The-Conversation Question: What is the best gift you have ever given someone?

Participants in the live cerebral palsy Twitter chat #CPChatNow discussed various topics Wednesday, December 12th, 2018. As co-host I am tasked to neatly summarize all the different discussion into your weekly recap. Wish me luck!

My co-host Devin Axtman originally posed the question during the December 5th recap. “What is the theme song of your life with cerebral palsy?” Blemi answered “She Moves in Mysterious Ways” by U2 while Devin himself responded “Won’t Back Down” by Tom Petty. Seth’s response meanwhile left him and I bonding. 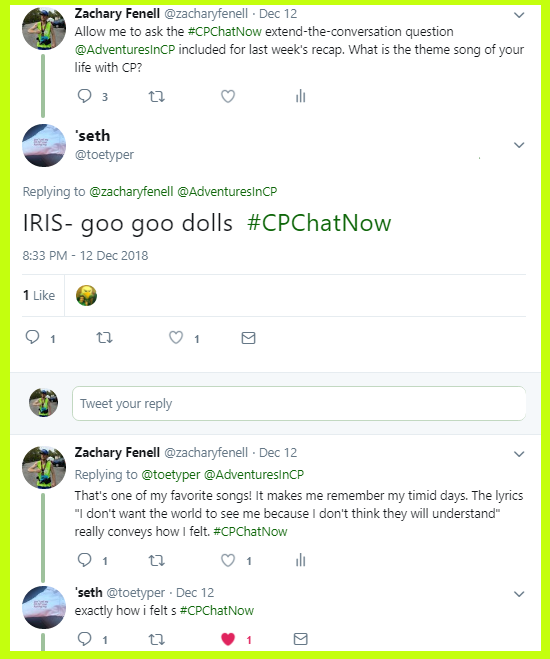 Seth replied “Iris” by Goo Goo Dolls. Personally I love that song. As I explained in the chat the lyrics “I don’t want the world to see me because I don’t think they will understand” strongly resonated with how I felt back in my timid days. Seth noted feeling the same way.

Devin asked whether anyone has CP related holiday traditions. He then named his. Devin’s family hangs the cabbage patch outfit Devin wore his first Christmas on their tree. Jeni Briere sympathized, recalling her older sister getting upset when their parents “stole” the sister’s cabbage patch kids clothes for Jeni to wear.

Simultaneously in answering Devin’s question I explored a separate aspect to holiday traditions.

Diverting a little from the original query, I named Christmas Eve dinners at Grandma’s house as my favorite holiday tradition. Although not directly CP related, I explained Grandma’s home remained largely accessible helping to create an enjoyable environment. Devin especially empathized alongside one factor I mentioned, needing a table to eat. A need not all participants shared though!

Hannah vocalized she prefers not eating at a table, a preference she reasons extends back to rarely doing so when growing up. No matter your dining setting preferences, everyone could probably agree the holidays can represent a stressful time. Stress eventually rose to the conversation’s forefront.

I asked how individuals keep themselves from over exerting themselves. Grace admitted she does not. Rather she counts on someone else to help keep her in check. Otherwise she will work herself to death or at least fall and/or encounter pain flares. Experiences I resonate with, mentioning I know I need to take a step back and refocus when my movements get extra sloppy.

What about you? Answer for the week’s extend-the-conversation question, “What signs indicate you are over exerting yourself?” Leave your reply in the “Comments” section.

Recognizing these signs stand vital. They allow you to better understand your limits, a subject Hannah knows too well. 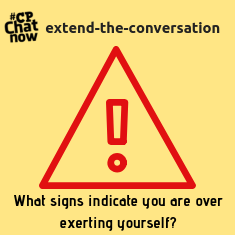 Leave your answer in the comments!

Similar to Grace, Hannah confessed to lacking balance within her life. Serious health complications the disruption in Hannah’s situation. Hannah named learning she can’t push past her body’s limits stood the hardest lesson. Familiarizing yourself with how your body tells you “Enough” stays vital to avoid over exertion. So again answer as the week’s extend-the-conversation question, “What signs indicate you are over exerting yourself?”

Reply below in the “Comments.” Then remember to join #CPChatNow every Wednesday, starting at 8pm ET.

First, Blemi sparked an intriguing discussion by asking if she should feel guilty for claiming the only handicapped parking spot:

Next, there was an enlightening discussion sparked by Shira’s tweet asking what members thought made someone strong in a community that is often seen as strong by default:

I added in the importance of attitude towards others:

Zach asked about how #CPChatNow had been a positive and many members talked about a positive of finding community.  Cirán discussed the positive of his distrust of escalators being validated from a previous discussion about the dangers of using escalators with CP:

Zach then asked members what they would make the official theme song of #CPChatNow: 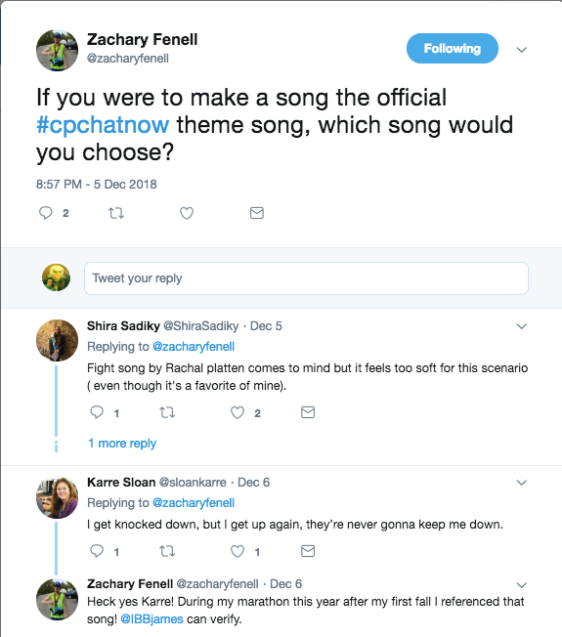 This brings to our Extend-The-Conversation Question: What is the theme song of your life with CP?  Please share your answers in the comments and join us each Wednesday at 8 Eastern on #CPChatNow on Twitter 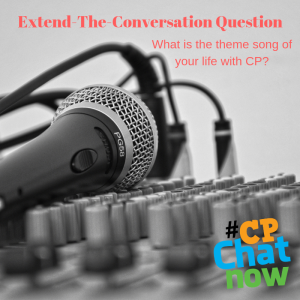 This past week the #CPChatNow Cerebral Palsy Twitter chat was bumping as always.  Members talked about their holiday wish list, what they wanted to be when they grew up, and what they feel is the worst occupation for someone with CP.  This is #CPChatNow Co-Host, Devin Axtman, taking you along for the ride on this week’s recap. 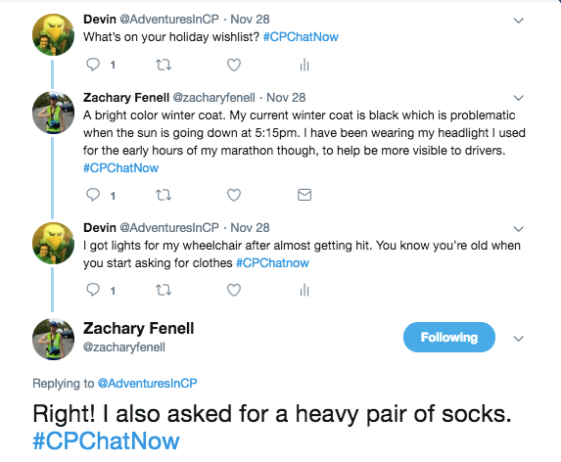 Next, members talked about what they wanted to be when they grew up as a kid.  There were definitely some amusing answers, but some also achieved their goal! 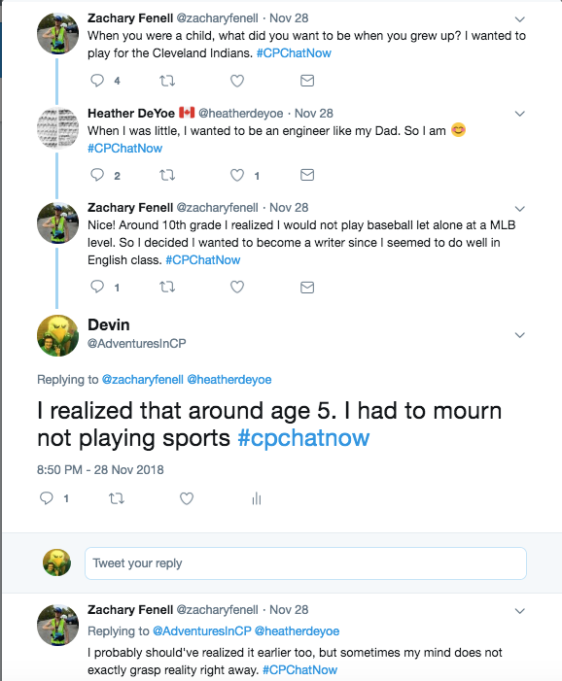 Zach and I had a common goal, playing baseball.  I had a little bit more lofty ambitions however, and Ayden would like to be the Leader of the Free World!

Zach asked about the occupations that members felt were the worst for people with CP. Dave shared some difficult positions he has had, a stagehand and line cook.

This brings us to our Extend-The-Conversation question: What was your dream job when you were growing up and did CP require you to change it?  Please share your answer in the comments and join us at #CPChatNow on Twitter at 8 Eastern each Wednesday. 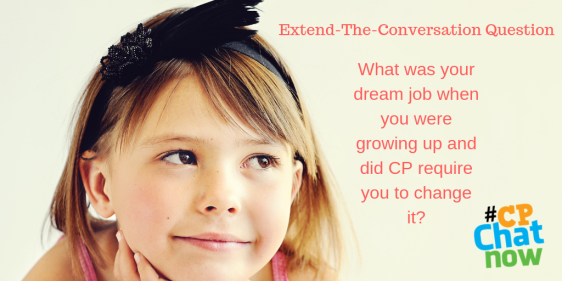