The way other people react to your cerebral palsy proved a popular topic during our June 28th, 2017 #CPChatNow Twitter chat. I am co-host Zachary Fenell. For your reading pleasure I gathered some highlights and compiled them into this recap.

Our community came through with suggestions to help Christine solve her challenges cleaning in low places. I mentioned I use a stool at work to more comfortably organize bottom shelves at the library. Meanwhile co-host Devin Axtman asked a follow-up question to better understand Christine’s situation. 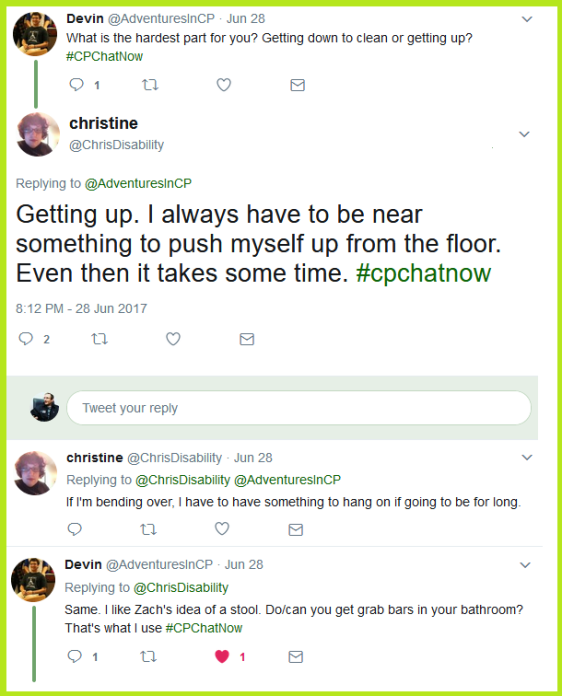 Devin related to Christine’s experiences and recommended grab bars. Emotions soon grabbed hold over the conversation when long-time regular Blemi shared a story from earlier in her day. 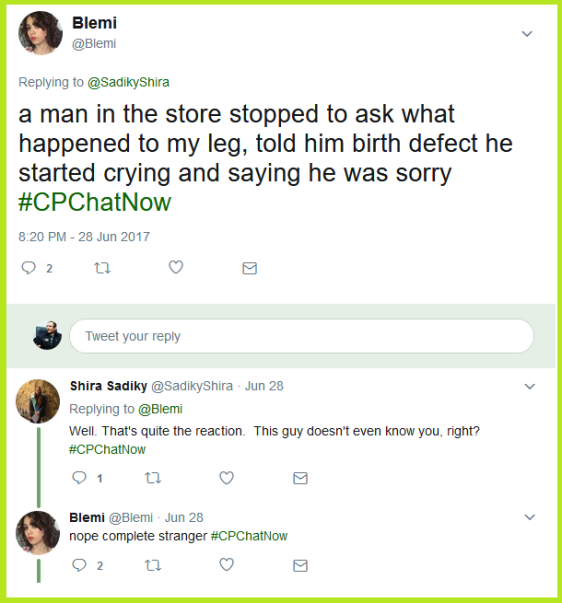 Blemi’s story really flabbergasted our community. Devin felt dumbfounded regarding how he might react in said situation. 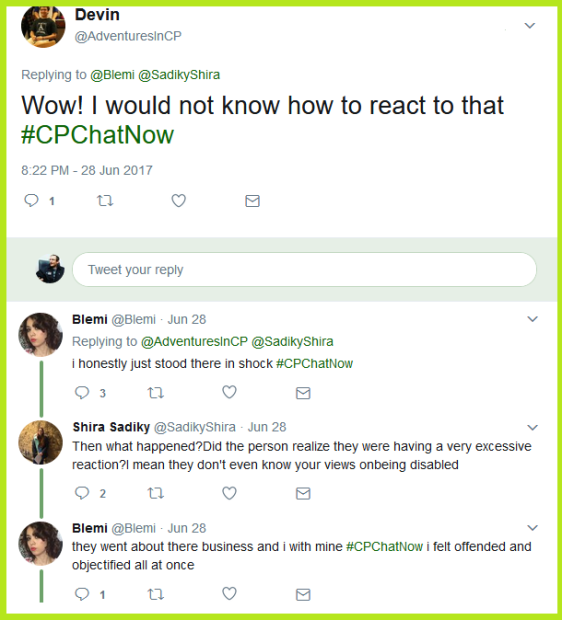 Reflecting more on the situation, Blemi expressed feeling offended and objectified. Her irritation led to the question why someone thinks you can ask such a personal question in the first place. 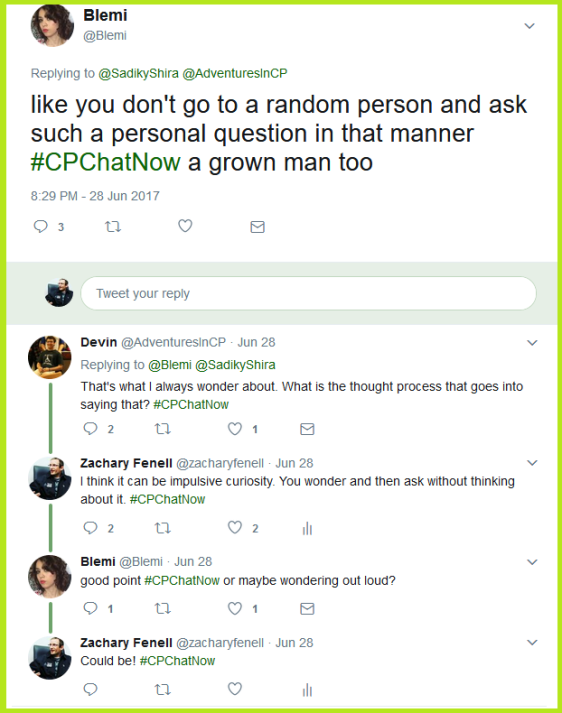 I postulated the other person fails to think prior to asking. Instead the question results courtesy impulsive curiosity. Or, “wondering out loud” as Blemi rephrased.

Perhaps you may relate. Let us know by answering this week’s extend-the-conversation question. “What is the most invasive question a stranger has asked you about your CP?” Reply in the “Comments” section. 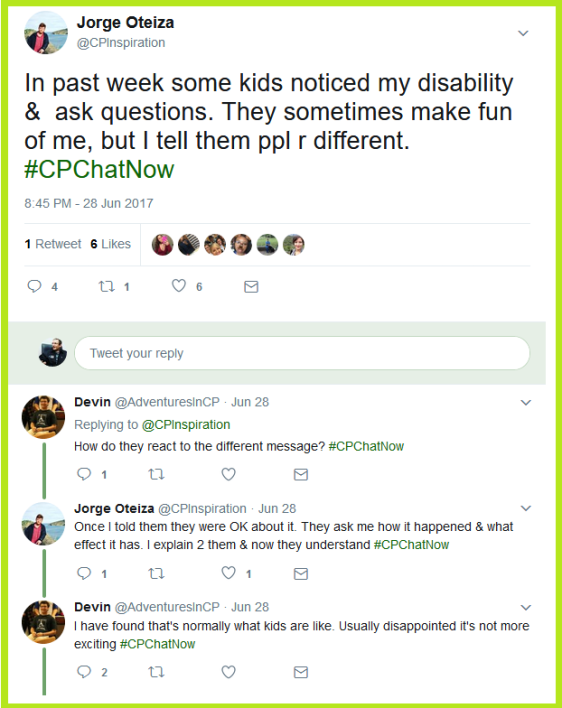 Jorge tells kids wondering about his CP that everyone is different. In my opinion, a great message to tell kids! Differences often cause self-consciousness. Sometimes to severe degrees where the person does not participate in an activity due to his or her differences.

Personally, I like to think I helped reduce the aforementioned last year with the shirt I designed “Run, Walk, Roll, Limp However You Move, Move!” A point I bring up not to self-promote but rather transition to the news I revealed to #CPChatNow June 28th, 2017. 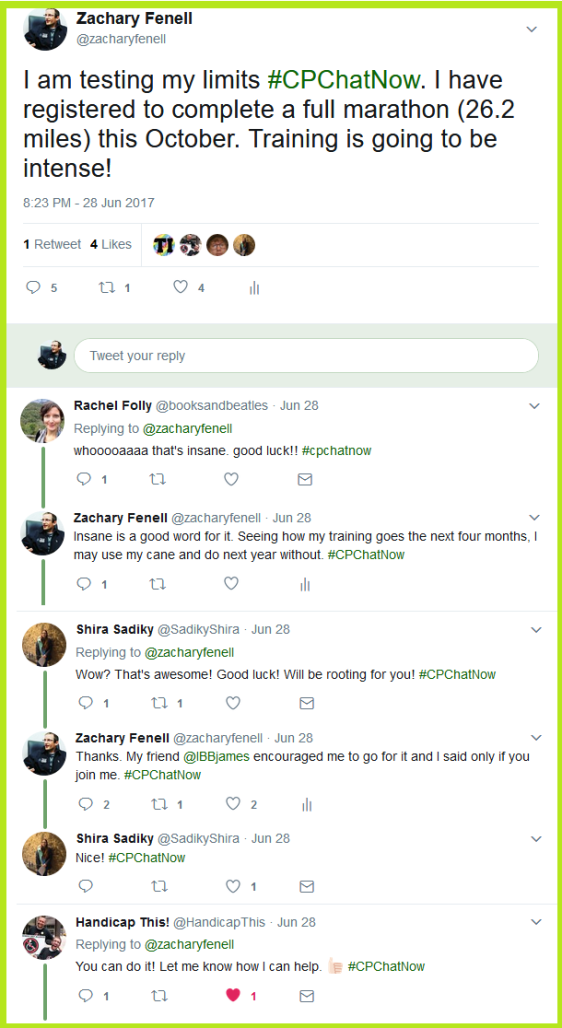 Thank you to everyone who offered me supportive words. Enough rambling about me, though! Remember to answer the week’s extend-the-conversation question. 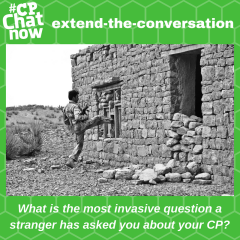 “What is the most invasive question a stranger has asked you about your CP?” Respond below in the “Comments.” 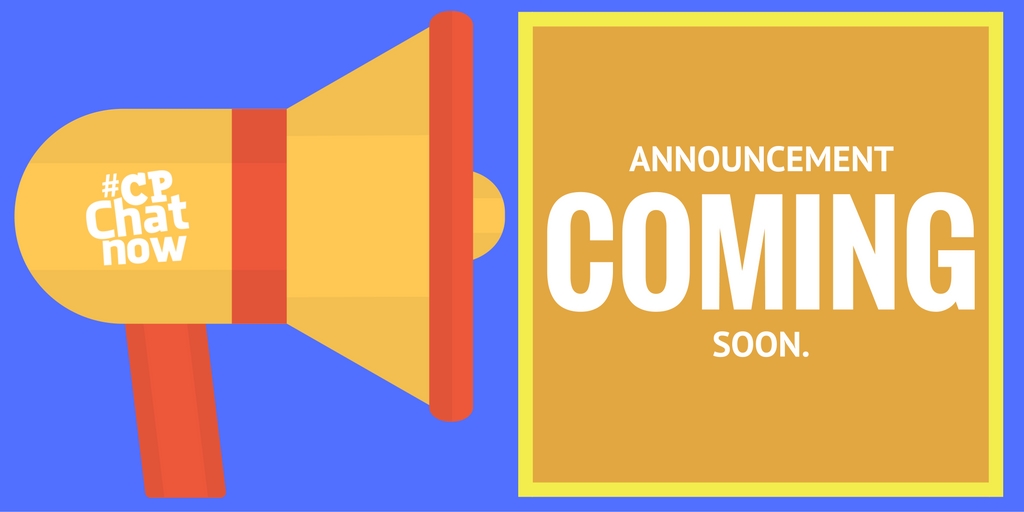