Participants in our weekly cerebral palsy Twitter chat #CPChatNow discussed many topics Wednesday, February 28th, 2018. I am co-host Zachary Fenell, taking on the challenge to recap the lively discussion. Before recapping the many subjects visited, I wish to emphasize a reminder given during the chat. 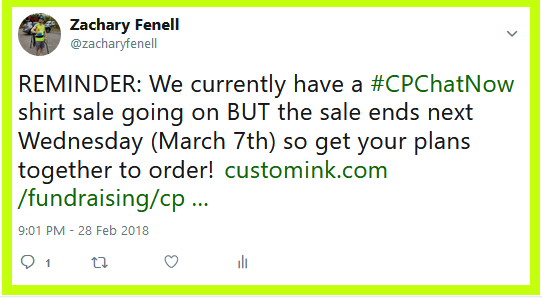 Currently we at #CPChatNow remain in shirt sale mode, with a shirt featuring a lime green #CPChatNow logo and a line underneath, also in lime green, reading “Established December 2013.” You can pick up the shirt in either navy, forest green, and/or sapphire. However, the sale ENDS Wednesday, March 7th, 2018 when the clock strikes midnight in the eastern time zone. So order today!

Proceeds from the sale will go to the non-profit foundation Keep On Keeping On (KOKO). KOKO assists those with severe disabilities through helping families fund physical therapy and other medical expenses. Help us help them make a difference by either purchasing a shirt or making a monetary donation.

Rachel asked what people planned to do for National Cerebral Palsy Awareness Month, quipping that her leg and hand “have been making me all too aware of CP as of late.” I replied I work to raise CP awareness year round through my blog, memoir Off Balanced, and public speaking. Nonetheless I plan to become extra focused in March.

Meanwhile my co-host Devin shared some skepticism. He wants to see meaningful activity oppose to”mindless awareness with no real impact.” Those comments lead us to this week’s extend-the-conversation question. “How do you feel about Cerebral Palsy Awareness Month?” Answer in the “Comments” section.

Amidst the aforementioned post “My Weird Dream Lately…#1” Linds recalled a dream where she proved free from cerebral palsy. I found the fact Linds didn’t have CP in her dream fascinating and pondered what a dream expert might deem the significance. Offering her non-expert opinion, Linds suggested the fact could relate to not knowing she had something called CP until fourth grade.

Her speculation caused other participants to reflect back on growing up with CP. A direction evolving into chatter centering around math class!

Rachel, Devin, and I went back and forth recalling our differing experiences in math class. Rachel described her math class as “sketchy.” I touted my good performance in the subject, at least until I reached pre-calculus. Devin possessed a relatively opposite experience. Geometry presenting the only math class leaving him to struggle.  Rachel added many with CP find difficulty with math.

Perchance the math keeps you hesitant towards purchasing a “#CPChatNow Established December 2013” shirt, I will crunch the numbers for you. Each shirt costs $24 and then another $4.99 in shipping, bringing the total to $28.99. The sale ends Wednesday, March 7th, 2018 at midnight ET, meaning upon this recap’s initial publication you hold less than 30 hours to order. Proceeds will go directly to the non-profit foundation Keep On Keeping On. 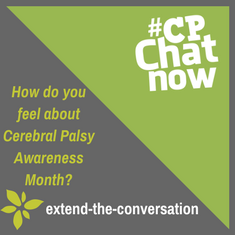 With that one final plug done, one task lingers. For you to answer the extend-the-conversation question! Again, this week’s question asks “How do you feel about Cerebral Palsy Awareness Month?” Respond in the “Comments” below.