A serious tone emerged during the weekly cerebral palsy Twitter chat #CPChatNow Wednesday, August 8th, 2018. I am co-host Zachary Fenell, hopeful you will forgive me for the tardy recap. You continuing to read I will interpret as forgiveness. Thank you.

Going into the evening I personally felt rather exhilarated.

Towpath Marathon’s Facebook page sharing a post I shared fueled my elation. Particularly, their comment “We’re looking forward to seeing Zach in two months!” Like I explained to our community, I feared the staff might adopt a different attitude, “Not again!” After all, I needed almost 12 hours to complete the 26.2 miles the previous year.

My fellow #CPChatNow co-host Devin Axtman remarked how life would prove easier if everyone demonstrated Towpath’s welcoming attitude. I asked “What do we have to do to make that happen?” Devin thinks the answer relies in educating children. Adding to his point I emphasized the importance behind consistent education, oppose to a special assembly here and there. What do you think? Answer for the week’s extend-the-conversation question, “How can we help others obtain a more welcoming attitude towards disabilities?” Leave your answer in the “Comments” section.

Regarding answering extend-the-conversation questions, I raised the prior week’s question. 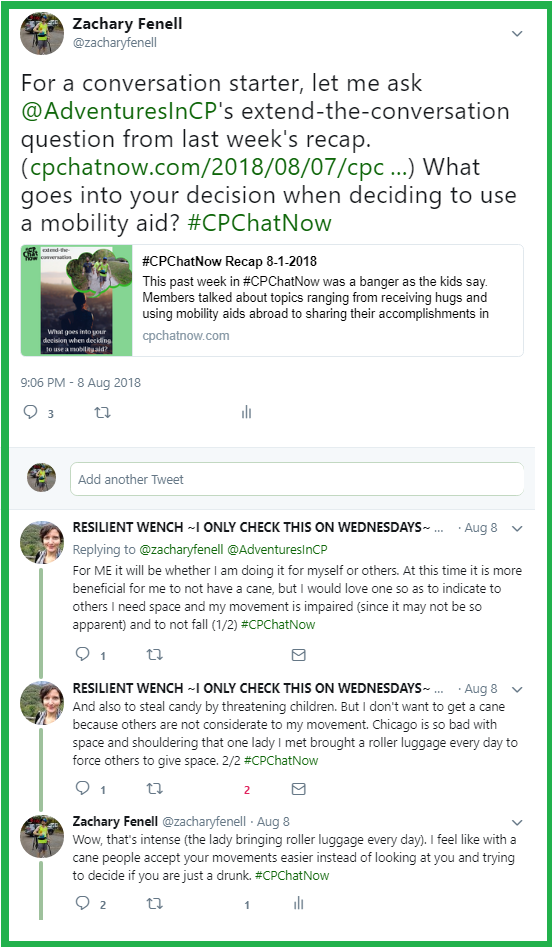 Amidst the August 1st, 2018 #CPChatNow recap Devin posed the question, “What goes into your decision when deciding to use a mobility aid?” #CPChatNow regular Rachel explained her decision making process, saying sometimes she benefits from not using a cane. but remains tempted to use one to visually show others a need for space with her movement. I replied saying a cane seems to make other people more accepting. Otherwise they tend to stare and think you are just a drunk. Sentiments Rachel related to. 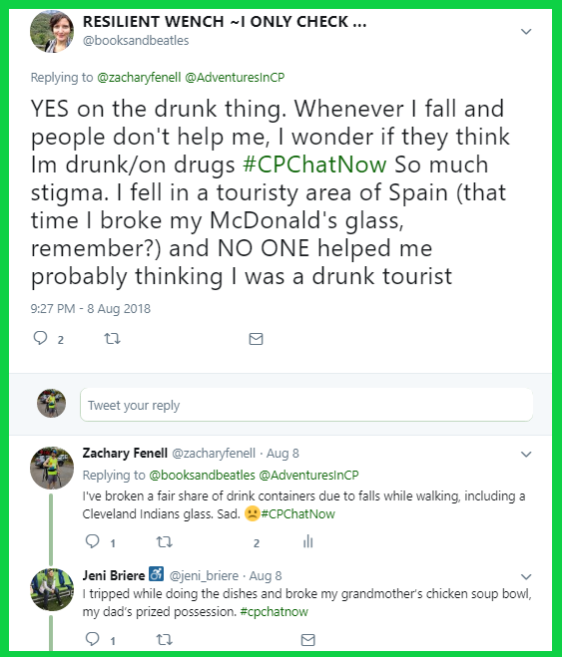 Rachel echoed the idea people mistaken individuals with cerebral palsy as drunks. She suspects others avoid helping her up due to this. Jeni Briere noted the danger in said scenario. 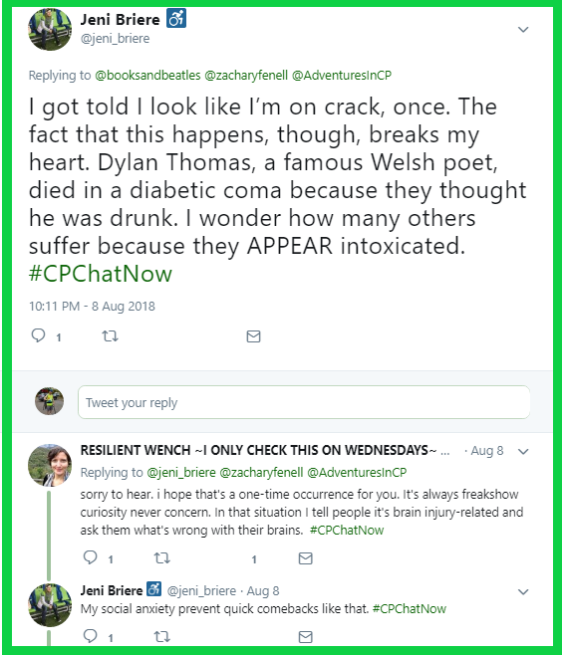 Jeni recalled a famous Welsh poet Dylan Thomas who died in a diabetic coma because others mistook him for a drunk.The thought left Jeni pondering how many more suffer because they appear intoxicated. Let us not end on such a somber note, though. During the August 8th chat, we announced our August 2018 Google Hangout date. 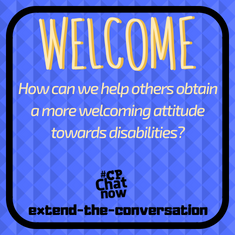 Besides marking your calendar, also remember to answer the week’s extend-the-conversation question. “How can we help others obtain a more welcoming attitude towards disabilities?” Respond in the comments below.