Your weekly cerebral palsy Twitter chat #CPChatNow started out on a despondent note Wednesday, October 24th, 2018. I am co-host Zachary Fenell here to tell you more, the best way I know how. Recap time!

Long-time regular Jen noticed I seemed a bit down at the chat’s beginning. I admitted to enduring a long day, although not necessarily a bad one. However, my spirits remained dampened by news WWE superstar Roman Reigns announced two days earlier. He revealed his ongoing battle against leukemia. I lost an aunt to leukemia and thus I am familiar with the difficult challenges the cancer presents.

Launching off the discussion between Jen and myself, I asked a question. 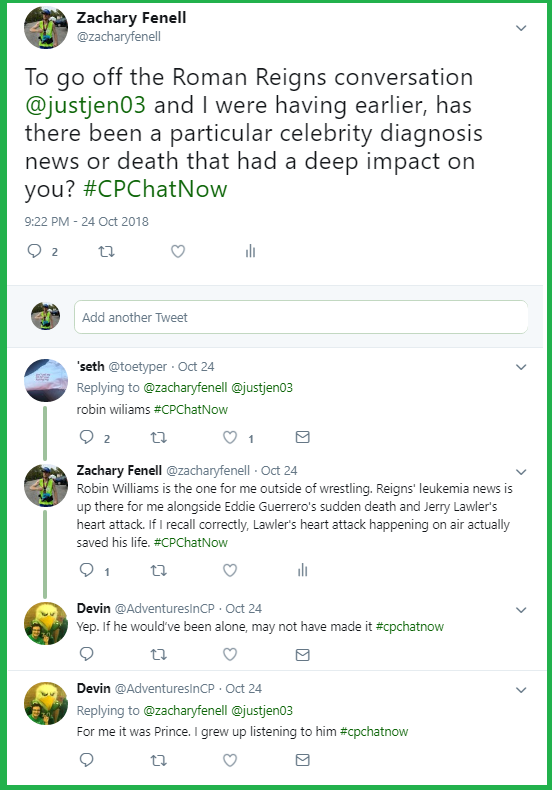 I asked participants if a certain celebrity death or health scare had a deep impact on them. Seth mentioned Robin Williams. Meanwhile my co-host Devin said Prince’s death hit him hard because Devin grew up listening to Prince.

To keep the conversation going while also transitioning to a more upbeat mood, allow me to ask as the week’s extend-the-conversation question, “How do you turn bad news into a positive?” Leave your reply in the “Comments” section.

Spirits uplifted during the Twitter chat October 24th when members began discussing the most recent Speechless episode “I-N– INTO THE W-O– WOODS.” 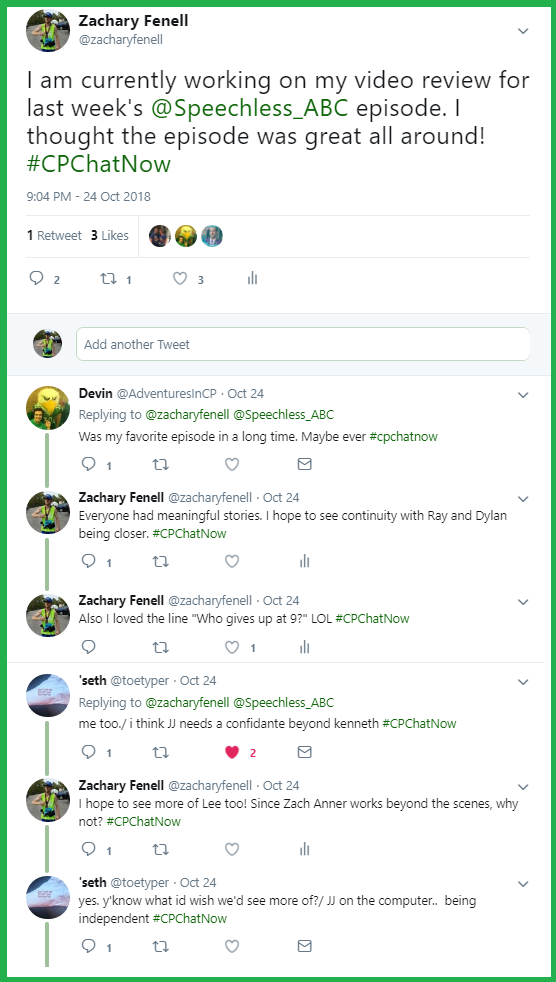 Devin loved the episode so much, he called “I-N– INTO THE W-O– WOODS” “my favorite episode in a long time. Maybe ever.” Seth liked JJ possessing a confidante beyond Kenneth. Additionally Seth expressed interest seeing JJ on the computer being independent.

Personally I am interested in viewing your answer to the week’s extend-the-conversation question. Again, the question asks “How do you turn bad news into a positive?” Comment below to respond. Next plan to join us on Twitter every Wednesday, starting at 8pm ET.