Devin continues to fill in admirably for co-host Blake Henry while Blake studies abroad. Tweets from Blake with the hashtag CPChatNow indicates our community remains on his mind. Although due to the time difference, said tweets come outside chat hours. So I thought to begin our February 1st chat by retweeting Blake’s latest update.

Early on in the chat I also announced the date for our February Google Hangout. This led to some jokes.

To fully appreciate the echoing humor, you needed to attend our January Google Hangout. Make sure you find your place on the Hangout invite list. Send a DM to Devin and/or me to request receiving the Hangout link Thursday, February 16th. 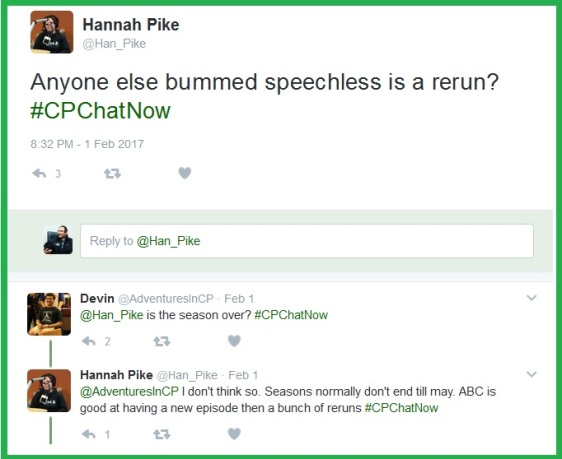 My interim co-host Devin questioned the broadcasting strategy where you air reruns in consecutive weeks.

Community regular Hannah pointed out such a strategy seeks to garner a show new viewers. Still, she agreed with Devin.

Meanwhile participant Jen Coventry, after a long day, arrived late to the chat. A fall on ice landed her in the ER. The situation left me referencing a comment I made two weeks ago. I joked we should all move to Tucson, Arizona and establish a snow-free society.

Time to keep the conversation going. Answer for the week’s extend-the-conversation question “What is the worst injury you’ve had to endure?” Respond in the “Comments” section.

Another noteworthy topic that emerged during the February 1st chat involved startle reflex.

Both Jens’ comments illustrates how knowing others with cerebral palsy aids in better understanding your own cerebral palsy. Perhaps you will learn something regarding your cerebral palsy tonight. Join us on Twitter starting at 8pm ET. First though, remember to answer the extend-the-conversation question.

“What is the worst injury you’ve had to endure?”

Leave your reply in the “Comments” section below.

The conversation proved fitting given a question posed to #CPChatNow previously in the week.

Now the best time to ask our community questions stands Wednesdays during the live chats (8pm ET-10pm ET). Obviously though, I make an effort to track #CPChatNow tweets throughout the week. Since @JourneyWithCP‘s question aligns with last night’s discussion, let us make her question the week’s extend-the-conversation question. Answer by commenting on this post. “How do you stay fit with cerebral palsy?”

Weather crept into the conversation too. That led to a tip for handling startle reflex amidst thunderstorms. 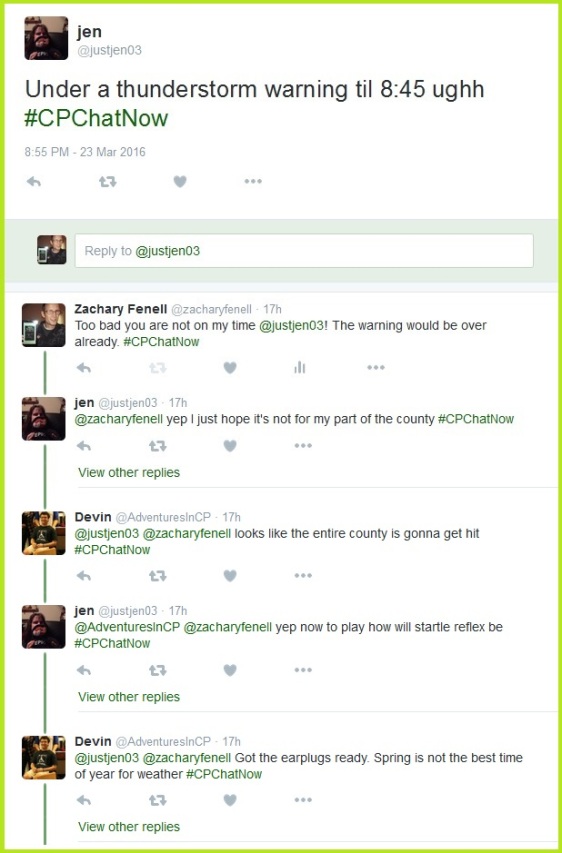 On a final note I shared a teaser for next week’s chat. 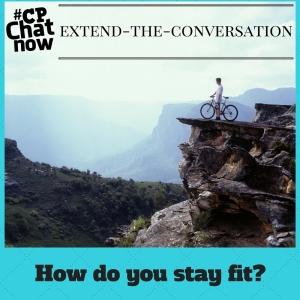 Answer this week’s extend-the-conversation question in the “Comments” section.

“How do you stay fit with cerebral palsy?”

Again, answer by leaving a comment in the “Comments” section below. Once you respond, gear up for Easter!   Spend time with loved ones and make Easter 2016 one to remember!