The first question focused on what has changed in members’ lives in the last four years.  Members shared many things, but it was interesting that many members had common changes:

The next question was about how members had heard about #CPChatNow.  Members shared various things such as discovering it on their timeline to seeing CP celebrities like John Quinn tweet about it:

Zach also shared the story of the creation of #CPChatNow.  A collaboration between John Quinn and @HandicapThis.

The next question related to specific questions or conversations that have stuck out to members.  Hannah shared the long running #CPChatNow joke of the story when someone asked if her CP was caused by getting ran over by a train:

Jen tweeted about the focus chat with @The_CP_Swagger and Hunter Gandee who has made national news by carrying his brother with CP on his back to raise awareness:

Zach chimed in with the exercise chat led by Erin while I said the dating or accessible gaming ones:

Members also mentioned liking that the conversations in #CPChatNow tend to happen organically and do not feel forced: 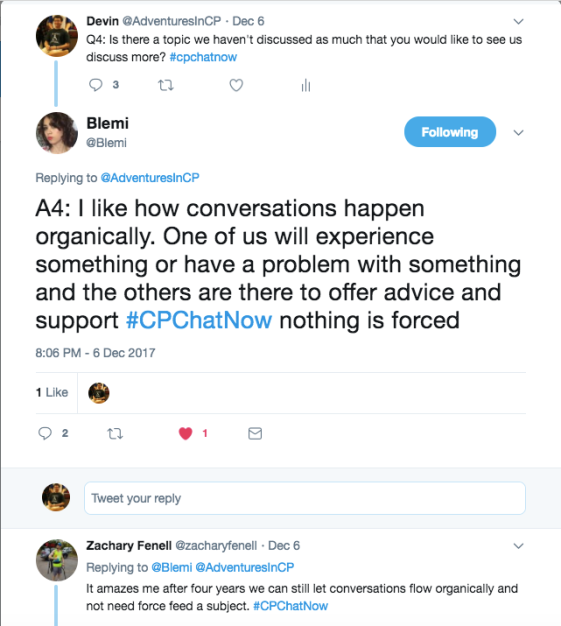 Finally, the last question in the Focus Chat was regarding who members would like to see be a guest on a future focus chat.  Members were consistent in requesting Micah Fowler of Speechless fame.

Now this brings us to our next Extend-The-Conversation question and I will use #CPChatNow’s fourth birthday as inspiration.  What has changed for you in the past four years and what would you like to see in the next four?

Answer in the “Comments” section.