This past week in #CPChatNow was festive as always. As you might imagine, talk centered largely around the upcoming holidays, but other topics were also discussed. Hop in the sleigh for this week’s #CPChatNow recap led by your Co-Host, Devin Axtman.

First, we have an announcement. #CPChatNow will be changing dates to Thursday for the next two weeks due to the holidays.

Kate joined us after graduating nursing school and shared some of her challenges of being a nurse with CP. She shared she would feel very fatigued when coming home from work:

Next, not surprisingly talk to turned to the upcoming holidays. Talk turned to cooking for family and what made a kitchen accessible and CP friendly:

Zach then asked if people put up a Christmas tree and if CP impacted their ability to do so:

Finally, Zach asked what people’s favorite Christmas traditions were. People talked of getting together with family and looking at Christmas lights.

This brings us to our Extend-The-Conversation Question: What is your favorite Christmas tradition? Make sure to share your answers in the comments and join us on Thursday at 8 Eastern at #CPChatNow.

One night removed from Christmas, individuals in the cerebral palsy community gathered for the last 2018 #CPChatNow live Twitter chat. Holidays remained a forefront concentration too, as you will see reading this recap. A recap gifted to you by yours truly, co-host Zachary Fenell.

Personally, New Year’s always puts me in the mood to reflect. Therefore I asked participants to share some positives from their last 12 months. Another long-time regular Hannah recalled making the most of the good moments. Hannah experienced relentless health concerns throughout 2018, so enjoying the good occasions became extra important.

Additionally, Devin responded saying 2018 brought him growth both personally and professionally. What about you? Answer for the week’s extend-the-conversation question, “What were positives for you in 2018?” Leave your reply in the “Comments” section.

Expanding beyond our personal 2018s, we furthermore explored 2018 relating to the overall cerebral palsy community.

Answering the question “What were positives for the CP community in 2018?” Devin named the continued media presence with Speechless and Maysoon’s project. That latter project refers to Can-Can, a sitcom starring actor, comedian, and past #CPChatNow participant Maysoon Zayid. In late 2018 ABC ordered a Can-Can pilot.

Can-Can possesses exciting possibilities. Same applies to Speechless perchance the show gets picked up again in 2019.

Speechless getting renewed for season three stood out to me as a 2018 positive for the CP community. Now I am hoping a fourth season will get the green light in 2019. Much potential exists story wise regarding JJ heading off to college. Devin noted he could even consult on JJ’s accommodations scenes! My co-host’s work history gives him the credentials. You never know, right? 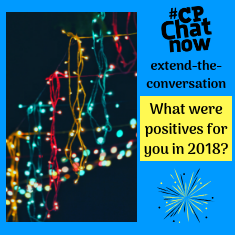 Depending upon what happens with Speechless and Can-Can, 2019 could get incredibly exciting for the CP community. Yet before we commit ourselves to the year ahead, let us take a final moment to remember 2018. Answer the week’s extend-the-conversation question, “What were positives for you in 2018?”

Respond below! Then make a New Year resolution to join us on Twitter every Wednesday at 8pm ET.

The week before Christmas was an eventful week as always in #CPChatNow.  Members talked about returning to their former clinic, the character of Tiny Tim, their grandparents, and more. This is #CPChatNow Co-Host, Devin Axtman, taking you along on this week’s recap.

The chat started with #CPChatNow Co-Host, Jorge, checking in from a vacation with his family:

Zach also talked about recently seeing A Christmas Carol and being disappointed with the Tiny Tim character:

With the holidays, talk turned to family, and specifically grandparents.  Blemi started the conversation by talking about her 95-year-old grandfather who has been a huge influence in her life and how he met her grandmother in a World War II internment camp:

Finally, Zach also discussed a memorable moment where he scooped ice cream for his grandparents. Zach shared his ability to perform tasks is often overlooked:

This brings us to our extend-the-conversation question: What do you wish others knew about your strengths while living with CP? 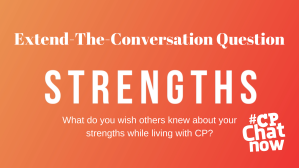