Every Wednesday you can count on the live cerebral palsy Twitter chat #CPChatNow for quality conversation. Or, at least I believe so. Seeing I am #CPChatNow co-host Zachary Fenell, I obviously possess a bias. Allow me to persuade you by providing you your weekly chat recap.

Exactly how enjoyable? My co-host Devin Axtman made efforts to multi-task despite his own exciting plans that night.

Devin joined #CPChatNow from Minute Maid Park, where he watched his Chicago Cubs play the Houston Astros. To use a baseball metaphor, Devin stepped up to the plate during the chat and hit a home run. The homer symbolizes the dialogue Devin sparked.

A feel good news story to many received a contentious outlook within our community. Devin retweeted Fox 5 DC’s post reporting about a local Home Depot building a young boy a walker. In Devin’s opinion the media missed the true story. How can the U.S. healthcare system not provide such basic equipment?

Long-time #CPChatNow regular Blemi added her input, pointing out by paying now you can save later. After all through providing treatments and devices you increase the likelihood individuals with disabilities become contributing society members. Meanwhile I highlighted a line found in the Fox 5 DC piece which struck me as odd.

My question left us contemplating the possibilities. Devin suggested perhaps the family was in the middle of the process. Further thought left me contemplating additional prospects. Maybe the parents tried calling, but kept getting put on hold. Or, they wound up talking to unhelpful representatives. Who knows?!

Rather than continuing to speculate, let us talk what we do know. Our personal experiences! Answer for the week’s extend-the-conversation question, “What have your experiences with insurance companies been?”

Comment below to answer. Then remember to join #CPChatNow each and every Wednesday, starting at 8pm ET.

This past week in #CPChatNow was jumping as always.  Members talked about being ambidextrous, learning to fall, and rebelling against CP.  This is #CPChatNow Co-Host, Devin Axtman, taking you along on this week’s recap.

Zach and Grace talked about being ambidextrous and whether that translated to falling to one side or the other:

Zach and Hannah tweeted about different techniques regarding learning to fall in PT:

Zach, Hannah, and I tweeted about having private PT and our parents sweating over payment details:

Next, talk turned to an interesting question Zach had.  He asked members about the first time they could remember rebelling against their CP.

This brings us to our Extend-The-Conversation question.  Zach had all of the good questions this week, so I will ask his question again for those who couldn’t participate on Twitter: “What was the first decision you made to rebel against people’s concerns over your CP?”  Share you answers and the results in the comments

The chat before Thanksgiving was very eventful as members talked about moving their impacted side(s), difficulty with insurance companies, inaccessible houses during the holidays, and more.  This is #CPChatNow Co-Host, Devin Axtman, and I will be taking you along for this week’s recap.

We begin this week’s recap with Rachel and I discussing having to purposely focus more on moving our impacted side(s): 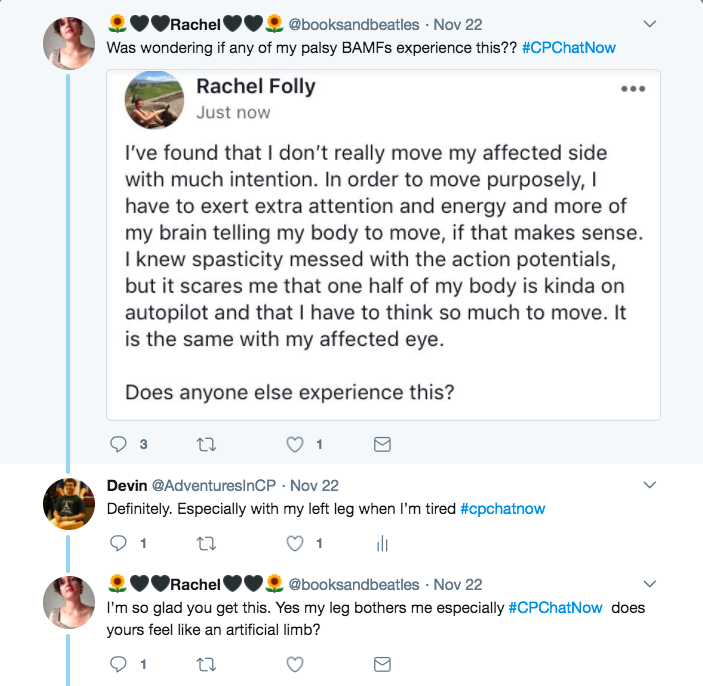 Next, Chris and Zach discussed the difficulties of dealing with insurance companies and the added frustration that comes with knowing the proposed treatment would save money in the long run:

Finally, much of the talk in the chat was surrounding member’s holiday plans.  Talk soon turned to accessibility issues members had while visiting family and strategies they had to deal with them: 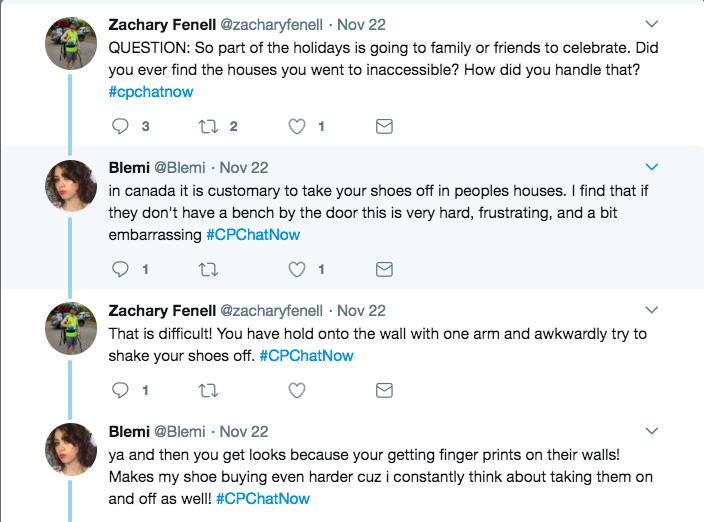 Paul and Zach also discussed family member’s houses with stairs and sliding on their butts to go down them: 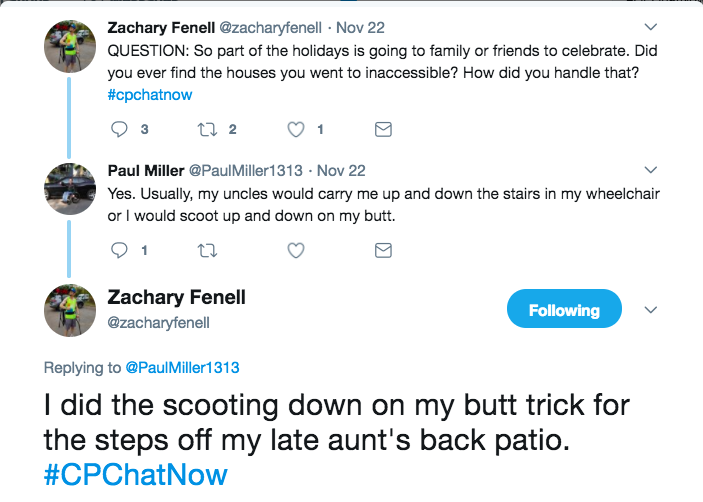 This brings to our Extend-The-Conversation Question: What are some out of the box solutions you have used in inaccessible situations?  Please share your answers in the comments and join us every Wednesday at 8 Eastern at #CPChatNow on Twitter.